Business and management consulting a dream for many entrepreneurs

With more professionals considering entrepreneurialism as a way to push forward with career goals and improve their work-life balance, the business and management consulting scene has become a top choice. The sector’s diverse workload and multiple gig economy success stories are drawing more attention than sport and travel.

Move over sports, education and media, the consulting sphere is now the place to be for many up-and-coming entrepreneurs. According to research conducted by freelance marketplace PeoplePerHour among 1,000 UK employees and 374 businesses (including 290 founders), business and management consulting start-ups are now considered the third most popular end-goal for Britons. The poll was still understandably topped by those with ambitions to launch creative, arts and design companies, at nearly 13%, while retail put in a strong performance at 8%, but at 6.3% of respondents, consulting surpassed leisure, sport and tourism, and hospitality and events management as the best of the rest. 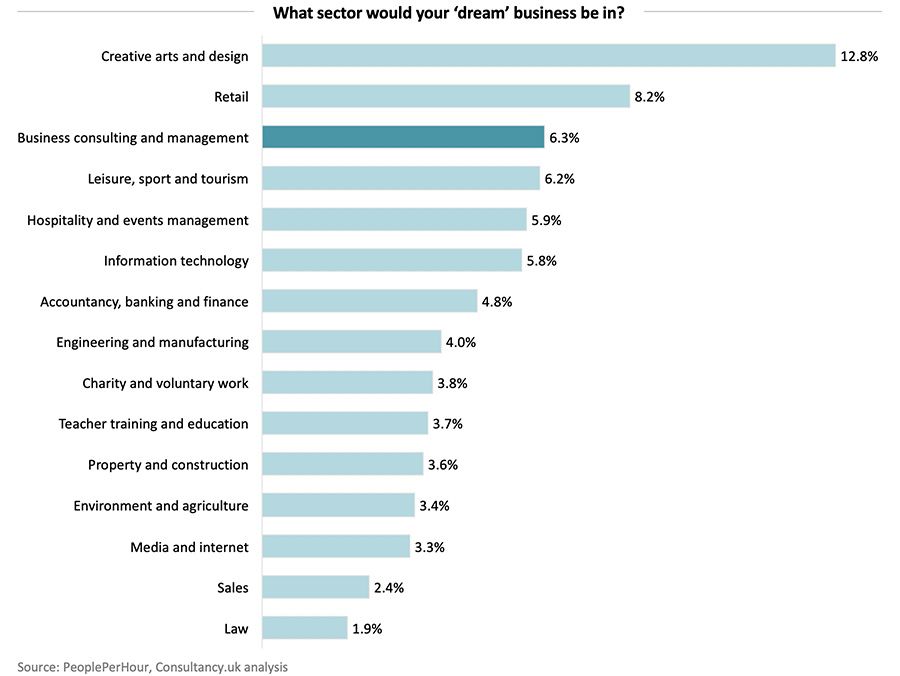 As the UK’s gig economy continues to boom, while wages for conventionally employed staff continues to stagnate, the study revealed that 71% of Britain’s employed workforce have considered starting their own business, with the highest number (46%) of employees over 45 unafraid and ready to take the plunge. According to the researchers, this is because prospective entrepreneurs are jumping from employment to achieve “the work dream”, or to have a better work life balance (39%), flexible hours (32%) and being able to do something they feel passionately about (43%).

Among the most important factors for weighing up entrepreneurial life, flexibility saw 54% relishing the opportunity to work flexible hours, while 47% said they are driven by having a better work-life balance. Two-thirds of those surveyed would want to work as a team, and when asked which attributes they would most like to see among a team they built for their entrepreneurial efforts, more conventional working values of honesty, loyalty and work ethic naturally topped the list. Interestingly, the second most popular factor cited was a sense of humour, with more than 30% saying this was an important part of the team they would like to build.

Apparently many of those contemplating life as an entrepreneur also see it as something of a short-cut to success. While just 4% believe it would take less than half a year to succeed, 47% of respondents said they expected success between six and 18 months. Only 16% meanwhile expected to have to play a long-game, waiting more than three years to succeed. 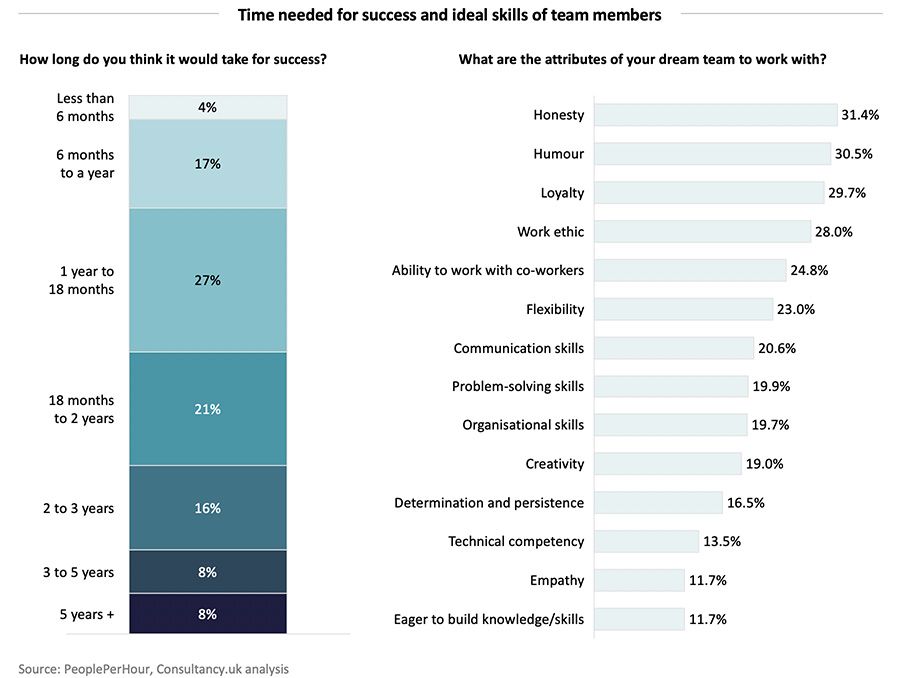 On the one hand, this could be said to reflect an optimism surrounding the gig economy at present, particularly in regards to consulting work, where pay is improved and hours are generally reduced in the freelance world. As many as 91% of freelancers insist they are satisfied with working as an independent consultants as a result, while more than half (53%) were highly satisfied. Just 5% indicated they were dissatisfied.

At the same time, however, those considering taking the plunge should be cautious before handing in their notice. In terms of online business, which theoretically should be logistically easier to establish than the varieties of work listed here, the fastest a business can be established – regardless of ‘success’ – is between four and five months in the UK, while in London this can be upwards of nine months. To that end, then, success may not be so quickly realised.

Meanwhile, going alone sees entrepreneurs operating on their own risk. Many who establish ‘personal services companies’ to work end up fulfilling services for very few clients – and they can be argued to be employees without rights or benefits in this respect. As a result, while in the short-term they may feel ‘successful’ with a larger immediate pay-check, their clients are saving money as they are not obliged to contribute to a pension pot, offer sick pay, or pay redundancy, should demand slow.